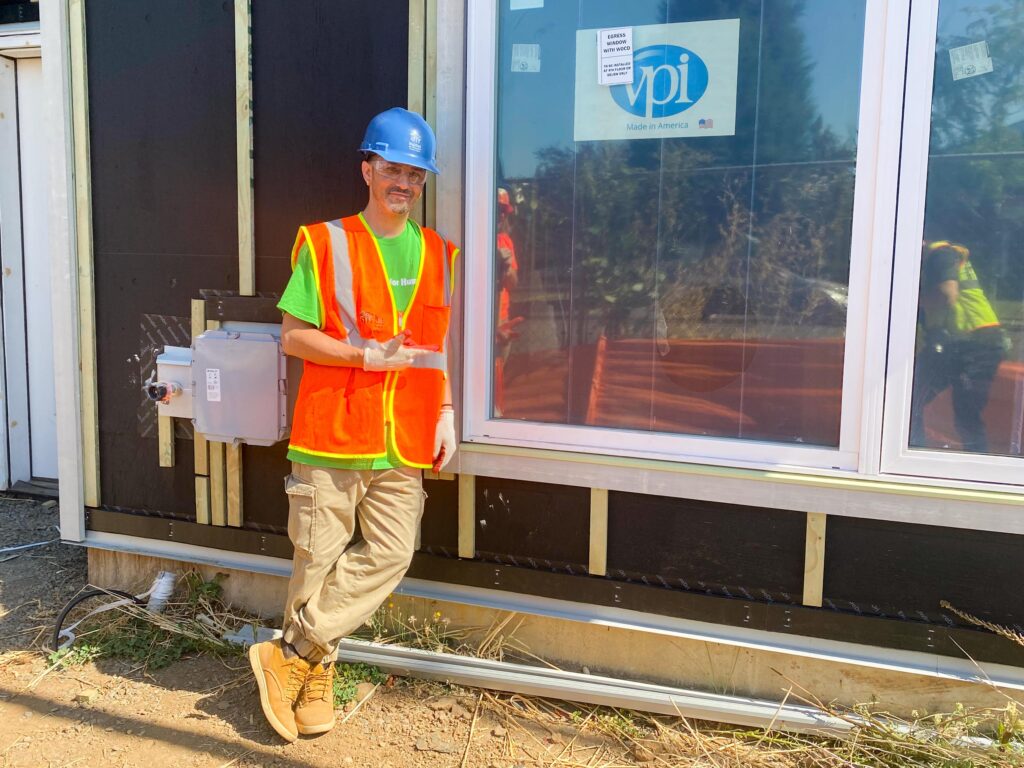 As Dominic hammered fencing into the ground outside his future house, he took a moment to reflect on his hard work and on how far he has come in the past 10 years. What started as only a dream is becoming a reality. Although the inside of his home is only wooden framing, Dominic sees much more – this is the home in which his children will grow up. Today this hard-working father of three is a homebuyer working shoulder to shoulder with staff, volunteers, and other homeowners to build a 31-home community where dozens of other families will get the chance to own a stable and affordable home.

Ten years ago, in 2012, Dominic faced a crucial moment in his life. He had just welcomed his first son, also named Dominic, into the world, while also seeking recovery from addiction.

“It was a very pivotal time in my life,” shared Dominic. “A lot of things came together with my son, legal things, my own spirituality. This was just a really, really powerful time in my life.”

Dominic built a community around himself to overcome the obstacles that addiction had laid in his path, and he began to dream of one day owning a home for himself and his children, just as his mom did when he was a child. He was only 10 years old, the same age as his own son today, when his mother purchased a house and ended the cycle of apartment rentals. As Dominic came of age, he realized how important that home had become to his entire family. It provided a safe place for them to live, but also benefited his mother financially as she accumulated equity by owning her own home.

“We always had a full house,” Dominic said. “It was just us, too, for a little while. You know, I got brothers and sisters that were in and out . But we always had other family, distant relatives, and such living in our house.”

When he was older, Dominic moved from apartment to apartment until he faced a significant roadblock. He developed a substance abuse disorder in 2012, which resulted in homelessness and trouble with the law. Dominic sought help from a residential addiction treatment center and, with perseverance, completed his recovery work.

Today Dominic is living a healthy, sober, and happy life and has his eyes set on building and purchasing a home through Habitat. He currently rents a three-bedroom townhouse in Southeast Portland where he lives with his son Dominic, his 7-year-old son, Malakhai, and his 2-year-old son, Kuzih. Although he is grateful to have an apartment to live in, Dominic has experienced the financial burden of rising housing costs, prompting him and his family to move multiple times over the past couple of years. Keeping his children in the same school also became a challenge since longer commute times meant a larger portion of his budget went to cover the cost of gas. As a result, his children transferred schools twice in the past year.

With his Habitat home, Dominic looks forward to planting roots for his family, a place where his children can grow within a community of kids. He’s also looking forward to building equity for his family.

“It’s been a feeling of excitement. But also there’s this feeling of , ‘Don’t count your chickens before they hatch’ type thing, you know, over a reluctancy to let myself get too excited. Just until the keys are in my hand.”

Dominic took part in a community walk where he took his children to see the house that he is building for them. “We actually got to do a neighborhood walk-through, and we were all excited about our rooms,” Dominic said. Even though it’s just a frame, we were definitely visualizing the setup.”

The family looks forward to the day in which they can sit together, just as they do every night, and finish off the day hanging out in the living room, playing video games, watching movies together, and falling asleep in a place they can call their home.

“My children have always been a joy and a blessing in my life,” Dominic said. It’s not hard to sit and just practice gratitude because, you know, I wouldn’t have it any other way… they’re a part of my story.”