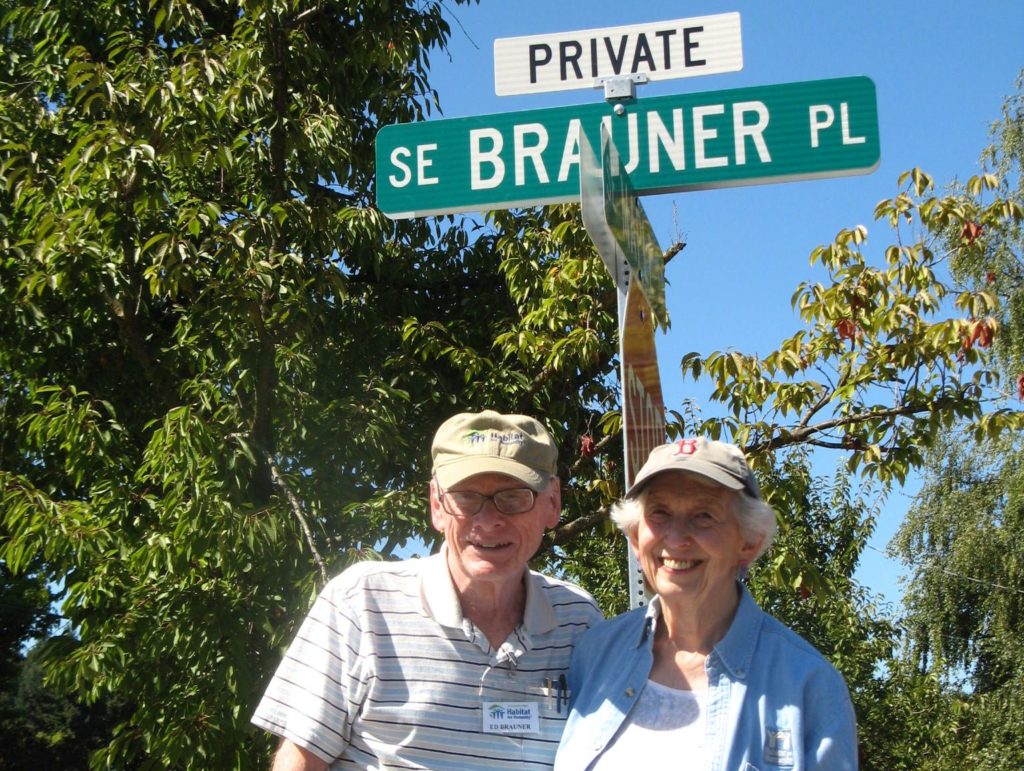 On a Sunday morning service in Southwest Portland in 1989, Habitat for Humanity Cofounder Millard Fuller spoke to the Valley Presbyterian Church congregation about the Theology of the Hammer.

“It’s not about your blue blood, your pedigree, or your college degree,” he said. “It’s what you do with your life that counts.”

He touched upon the importance of grassroots efforts and collective action; about the strength in bridging divides and coming together as volunteers to build resilient and inclusive communities.

Listening attentively in the pews was Ed Brauner, a devout family man, husband, and local engineer. Millard’s last words rung in his ears, “Let’s pick up a hammer and get to work.” He didn’t need to hear more. Shortly thereafter, Ed and his wife, Ellen, joined 100 congregates in North Portland’s King Neighborhood to witness the impact of this new organization.

Former Habitat Portland Executive Director Jeff Merkley (who would go on to later become a current Oregon Senator) guided folks through a block of houses that would soon become affordable homes to first-time homebuyers. Ed left that experience feeling inspired that such large-scale transformation was made possible through the helping hands of volunteers.

He began volunteering regularly with the Portland Habitat for Humanity affiliate. At a three-day regional meeting, Ed learned that a new chapter had formed on Portland’s westside. He enjoyed meeting the founders; they told him of their struggles to raise funds and the challenges of building a house on a very steep lot. Appreciating Ed’s enthusiasm and engineering knowledge, they invited him to attend their board meetings and after three meetings they nominated him as board president in 1994.

Since then, he has become an integral part of Habitat’s impact throughout the region. From surveying blueprints to church fundraising to crafting blessings for new homeowners, Ed’s commitment has no bounds. His kind and attentive stewardship helped lay the foundation for a close-knit community of volunteers—in home building, strategic planning, philanthropy, and beyond.

“I’ve had some wonderful times with good and wonderful people,” Ed says.

One of his favorite memories is partnering with a local couple, Liz and Tony Jeffrey, who were inspired to donate Habitat a plot of their land. They were a family of modest means who wanted to pass on the generosity they received when purchasing their home. Ed joined fellow volunteers, Al Vance and Bill Huntting, on a grassy span in Aloha. Shovel in hand, he asked, “Can we do it, Al?” Al replied, “Sure, we can!” That land became 10 homes, which they named Samaritan Court after the Bible story of the good Samaritan.

Back in those early days, Habitat volunteers budgeted on faith, as Mark Forker, recently retired Willamette West Executive Director, puts it. They’d start out with some seed money, begin building, and keep faith that the funds needed to complete each home would trickle in.

Ed would go on to build countless homes with Habitat, found a church outreach committee, and be named Board Member Emeritus. His love for people became a magnet for supporters. Friends became donors, volunteers, and board members. His late wife, Ellen, was often onsite, served on several committees, and helped families transition into their new communities. Ed and Ellen instilled civic-minded values into their children, Bill, Cara, and Jeanne, who grew up witnessing their parents build a thriving organization from the ground up.

Brauner Brook, a nine-home community in Hillsboro, was named in their honor. And the Brauner Award is given to a few select volunteers every year who have communicated the spirit of Habitat with leadership, kindness, humility, wisdom, and sustained dedication.

His advice to friends and strangers alike: “Make the most of your lives. Whether you do it here at Habitat or in many, many other ways, you can do it. Take advantage of it because it’s worth it.”

Inspired to make an impact? Volunteer opportunities are currently available at our four ReStore locations and we are recruiting Regular Volunteers for select build sites. Learn more and register today.