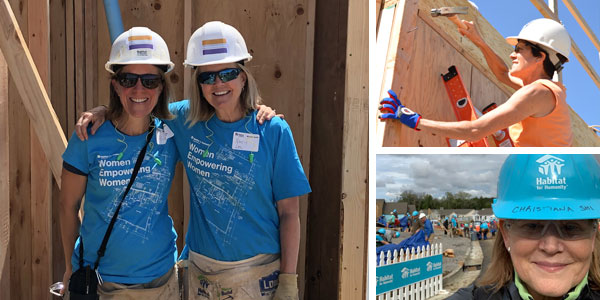 Amidst the buzz of the chop saw, quick punch of the nail gun, and hammers pounding away in the distance, Regular Volunteer and Women Build CREW member Leslie Johnson led a group of Habitat for Humanity homebuyers through the process of trimming inside closets. She pointed toward a corner that needed measuring and asked the group, “What’s next?”

It was time to make angled cuts to create the supporting frame. She and Tanisha went down a flight of stairs toward the chop saw. “I’ve only done this once before,” Tanisha said. “That’s okay,” Leslie encouraged. “You can do this.”

For the first two cuts, Tanisha took her time measuring, re-measuring, and measuring again. She was nervous and did not want to make a mistake. “You’ve got this,” Leslie reassured, and Tanisha pushed on.

By the end of the day, as Leslie bellowed out measurements from the top floor, “19.5 x 22.24!” Tanisha was lightning fast; making precise slices through the wood and running fresh-cut one-by-fours up the stairs.

“In the course of six hours, she dominated that chop saw,” Leslie says, proudly.

It’s moments like this that exemplify the strength of women empowering women. It is also Women Build’s slogan and CREW’s acronym: Creating Resources to Empower Women. Their contribution to Habitat’s mission goes beyond creating a space where women can build skills outside the traditional scope of what is considered “women’s work.” The members of CREW are breaking barriers and building assets to elevate this indisputable fact: housing affordability is a crucial women’s issue.

With the average median household income for a single mother in Portland well below $30,000, owning a home is  out of reach. Compound that with historical barriers to access credit and a gender pay gap that persists and significantly widens for women of color), homeownership is nearly impossible.

CREW exists to help bridge that gap. In addition to fostering relationships among Portland women leaders, each member of CREW raises vital funds to sponsor a home for Habitat homebuyers; often a home for a single mother. In fact, nearly 40% of Habitat homeowners are single mothers. After purchasing their home with an affordable mortgage , Habitat homeowners can continue building a stable life for themselves, their family, and their community. As CREW member and Habitat for Humanity International board member Christiana Smith Shi says, “If you take care of women, they take care of the village.”

Why did you join CREW?

Christiana: “What appealed to me most was taking my impact to the next level. I had supported Habitat for decades, but never stepped foot on a build site. Now, I have two Carter Work Projects under my belt and builds in the Dominican Republic and Mexico, in addition to years of building with Women Build here in Portland. It’s been a passion of mine from a volunteer and philanthropic standpoint to uplift women and CREW seemed like the most direct way.”

Nancy: “Being able to build advocacy and a network of involvement with and for women. It’s an opportunity to learn new skills, but also to contribute in a positive way.”

Leslie: The idea of creating a group of determined women to help women, organized and run by women was just what I needed.  I love building homes, brick-by-brick nail-by-nail, but it is a long and many stepped process.  CREW has provided us members a chance to understand and attack the women’s housing affordability issue.  I love the energy and focus of our group in CREW.  It is all about mojo not ego.

What do you envision for the future of CREW?

Leslie: “With data comes knowledge and with knowledge comes change. It would be awesome for us to do seminars about home maintenance, daylight current women’s issues around housing, and more–and encourage people to get involved.”

Christiana: “I’d love to continue building a community around women Habitat homeowners, and once they’ve situated themselves in their new home and become more stable, invite them to join CREW. It would be a full circle-of-life process.”

Nancy: “I believe diversifying Women Build and CREW would strengthen our impact. Inviting more women throughout our community allows us to be more forward-thinking and relevant. I want to wrap even more women into the fold.”

What words of wisdom would you give to your younger selves?

Nancy: “Get involved in something like this sooner. Sometimes we can be so involved in our career, we can’t see beyond that. It’s especially important for young women to get involved and contribute their talents directly into our community.”

Leslie: “1. Chill out. 2. Add balance in life. Find your connection. A big nugget in life is giving back to the universe.”

Christiana: “Be even less patient. In our generation, things had already changed so much in the 70s so in the 80s. There were still challenges, but you thought, ‘We already got this much so don’t push it too much.’ I admire women who are like, ‘Forget this, we need change and we need change now!’ Be more impatient and more demanding. And also: recognize the leader inside myself earlier. Volunteering in things like CREW and Women Build can help elevate a woman’s sense of her own power and own leadership sensibility. When you know how to do something well, you can teach others how to do it. And you’re not only teaching, you’re leading.”