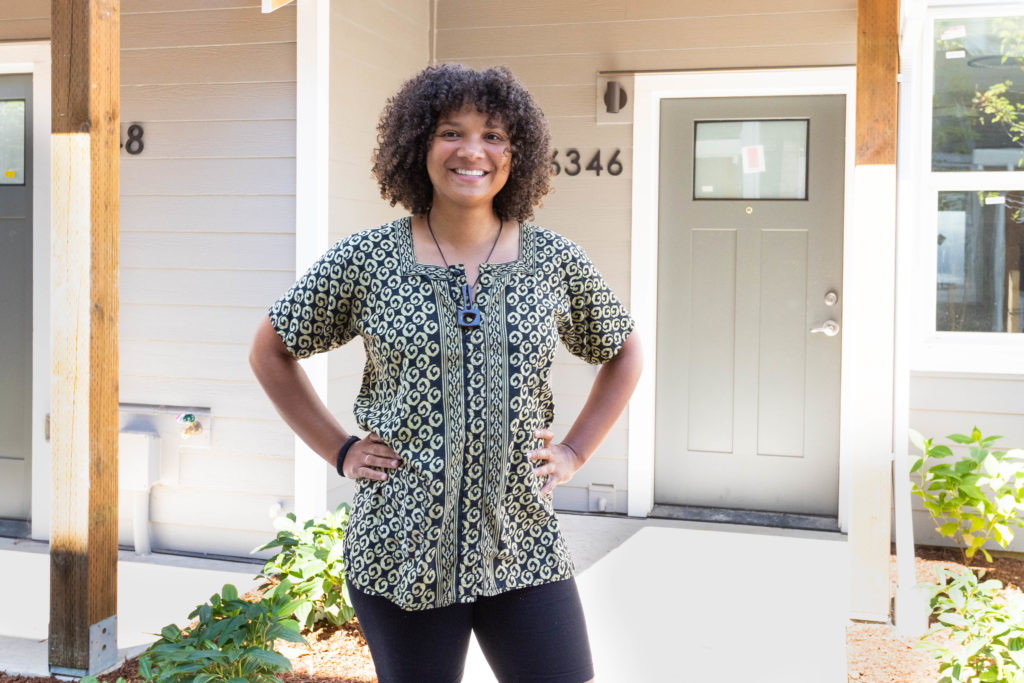 Jamie spends her days supporting life-affirming independence for adults with disabilities, but soon she’ll be building equity toward her own independence—financial independence, that is. Her new home will allow her to save money on a monthly basis while reaping the longer-term benefits of affordable homeownership.

As a single mother with a busy service career, Jamie isn’t used to putting herself first. She became aware of Habitat for Humanity through the Portland Housing Center in the Fall of 2019  and decided to apply”. When she got accepted to the program and learned she’d become a homeowner, she was really excited.

“You start to get a better vision of what your future will look like,” says Jamie. “It’s been a really fun process.”

A native of Minneapolis, Minnesota, Jamie and her daughter moved around a bit and settled in Portland in 2017. The change opened up new and fruitful opportunities. After working for other people and managing group homes, she founded her own business, Align PNW, which provides support for adults with developmental or intellectual disabilities.

“We bring them out into the community for integration and we do some things in their homes,” she explains. “We’re helping people be independent and meet goals that are specific to them.” She started Align PNW in the midst of the pandemic and has been working ever since.

There tends to be high turnover in this field, but Jamie finds the niche a natural fit. And it turns out Oregon does things differently–in a good way. Whereas in her past experience, Jamie found the industry centered around activities within group homes, here in Oregon, care providers focus more on individuals. This means finding out what people want to do and taking them out of the homes so they can accomplish their goals.

“I trained and hiked to the top of Mt. St. Helens with someone last year. That was her goal that she set. It took us 17 hours, and it was such an accomplishment. Someone’s goal can be as big as summiting Mt. St. Helens, or it can be learning to manage their money better,” Jamie continues. “I love the variety and also exposing them to things they may not otherwise be able to access on their own. It’s a big day, but at the end you’re just like, ‘Wow look what we did.’”

That feeling of awe and accomplishment carries over into Jamie’s home–a home she helped build. She talks about working alongside other volunteers to measure, cut and nail siding.

“I went home and called a friend and said I could side your house,” she laughs. “That was a big deal for me–to feel confident that we could do that. There’s a pride. I can say: I physically did that.”

Jamie recommends her experience in the Homebuyer Program and enthusiastically says that anyone who has the opportunity to build their own home would likely feel connected to their house in the same way she already does. She hopes that people are aware of the available resources and committed to learning about what’s possible.

When Jamie moves into her new Habitat for Humanity home in Portland’s vibrant Cully neighborhood, she imagines leaving the front and back doors open and doing a bunch of celebratory snow angels on the carpet. She notes that she looks forward to her family coming to visit and seeing all the nice, new things. For Jamie and her daughter, the excitement of owning their own home is only the beginning.