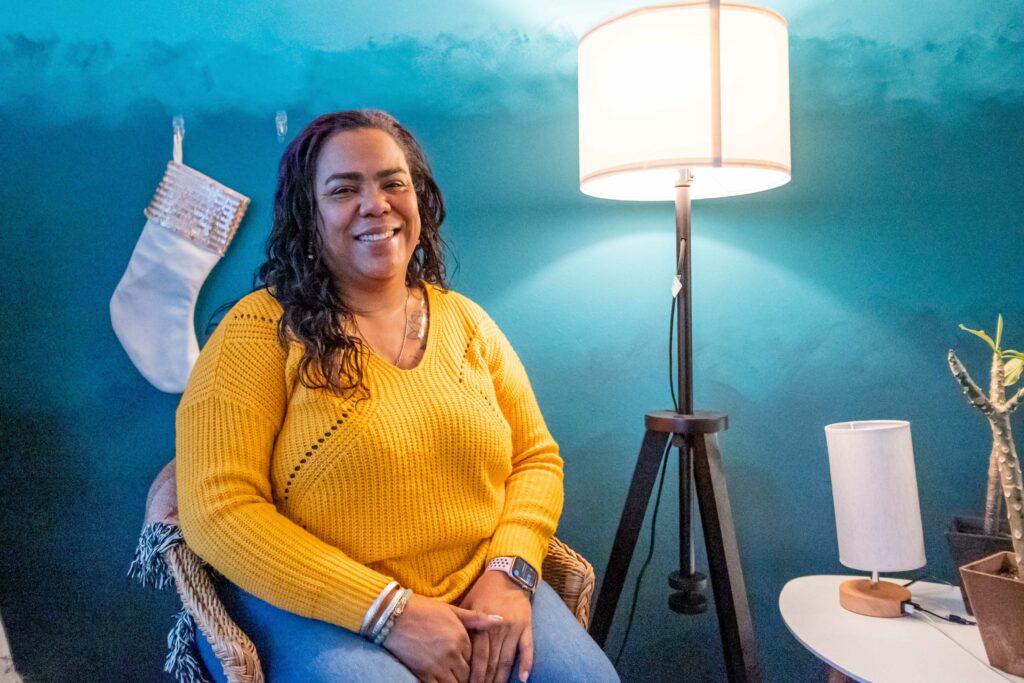 Hula and Habitat for Humanity forever altered Leina’ala’s life. One connected her to her cultural roots; the other let her lay down new roots of her own.

In August, Leina’ala became a first-time homeowner at Habitat’s Kenton Commons in Northeast Portland. But before she even had the keys, she knew every inch of her new home. She had helped build it — installing doorknobs, caulking, painting shelving, and finishing the closets. “Any projects they wanted me to do, I more than happily did them,” she said.

Leina’ala grew up in Northeast Portland in the home her parents have lived in now for more than half a century. As a single mother with two sons, Leina’ala had always rented apartments, up to the point where she decided she wanted what her parents had: a home to call her own.

“In some way, shape, or form, I knew the next place I moved to was going to be my place,” Leina’ala said. “I don’t want to keep on renting when I can own something.”

Leina’ala connected with Habitat after working with the Portland Housing Center and qualifying for the city’s N/NE Preference Policy. The policy gives priority placement to housing applicants who were displaced or at risk of displacement, or descendants of households that were displaced due to urban renewal efforts in North and Northeast Portland. For Leina’ala, it meant she was able to stay near her family and the community where she grew up and now works.

She entered the Habitat homeownership program and put in more than 180 hours on site helping build her new home. She was onsite three to four times a week, helping with the home’s construction and offering input on design details.

“When I do something, I’m very committed,” she said “I knew the commitment level, and I knew what I was going to get at the end. I just got to hold out and it’s gonna happen.”

That commitment shines through when she talks about the impact of hula dancing on her life. What began as a way for Leina’ala to connect with her family’s culture — her mother is Hawaiian — has become a cornerstone in her life. She began taking hula lessons with her son more than a decade ago, and she counts her teachers and the Pacific Islander community they created among her closest friends.

Hula has also propelled Leina’ala’s career as a dancer and a teacher with teens. She works with youths with Portland Parks and Recreation at the Charles Jordan Recreation Center, where she hosts weekly hula classes, among other activities. And she taught hula to Habitat youth as part of her sweat equity hours. When Leina’ala was ready to move into her new Habitat home in August, her original hula teachers, who now live in Montana, came back to Portland, and conducted a ceremonial blessing. It was an emotional event for Leina’ala.

“I have been to a blessing before, but because it was mine, it meant a lot more,” said Leina’ala. She reflected on the past few years that led up to that moment: being laid off during the pandemic, taking on two new jobs, working to put her credit in order, and spending days on site helping build her home. She was overjoyed to share the moment with her closest friends. “That’s why I was so emotional. Because they knew all the steps that I’ve been going through.”

Leina’ala spent the new year in Hawaii with her hula teachers, studying the culture, seeing family in Honolulu, and enjoying the community.

Before working on her Habitat home, Leina’ala didn’t consider herself a DIY kind of person. “I don’t work with my hands. I’m not, like, that kind of person,” she said of her former self. That all changed once Leina’ala donned a hard hat and went to work. She said the experience was eye-opening and immensely satisfying — particularly since it was her own home she was building.

“I loved it so much!” Leina’ala said. She enjoyed seeing the progress on what would be her home. “It was good to see it go from nothing and turn into something,” she said. “You really do create a sense of ownership, like, ‘I did that.’”

The first night in her new home, Leina’ala went to work again, this time with paint. If she couldn’t live in Hawaii, Hawaii would live with her, and soon bright sunsets and an ombre sea of turquoise emerged on her bedroom and living room walls. She’d never painted like that before.

The calming, blue-green wall is Leina’ala’s favorite feature in her home, and in a close second is her kitchen island, where her hobbies in baking and cooking shine. She has revived her subscription-only baking company, Ho’ono, to help pay for her trip to Hawaii.

Hawaii also comes alive along a wall near Leina’ala’s kitchen, where she displays a collection of Hawaiian items — gourd drums, colorful flowers, leis, and family photos. It’s not a shrine, she insists, but a living part of her Hawaiian heritage and hula-inspired life.

Leina’ala recommends Habitat’s homeownership program to friends she knows are looking to buy a home, including her son. But even though her adult sons don’t live with her now, Leina’ala is comforted by the fact that this home will stay in her family, affordably, for her lifetime and for her children.

Leina’ala now wants to share the homebuilding experience with the teens she works with at her job. In addition to the creative and instructional activities provided to youths, Leina’ala wants to incorporate more exposure to future career opportunities. She hopes someday to get a crew together from Parks and Rec to volunteer on a Habitat build site. Habitat regularly hosts volunteer teams from companies and organizations, and Leina’ala believes the experience would be empowering for young adults, who may come to see homebuilding, and all its aspects, as a possible career.

“I’ve always loved working with kids in general; they’re very inquisitive.” she said. “I want teens to feel seen and heard and know that they can have an impact in their community, that they can do great things.”

“You never know what impact you have. If you don’t give them that opportunity.”

And she still has her Habitat hard hat for when that day comes.