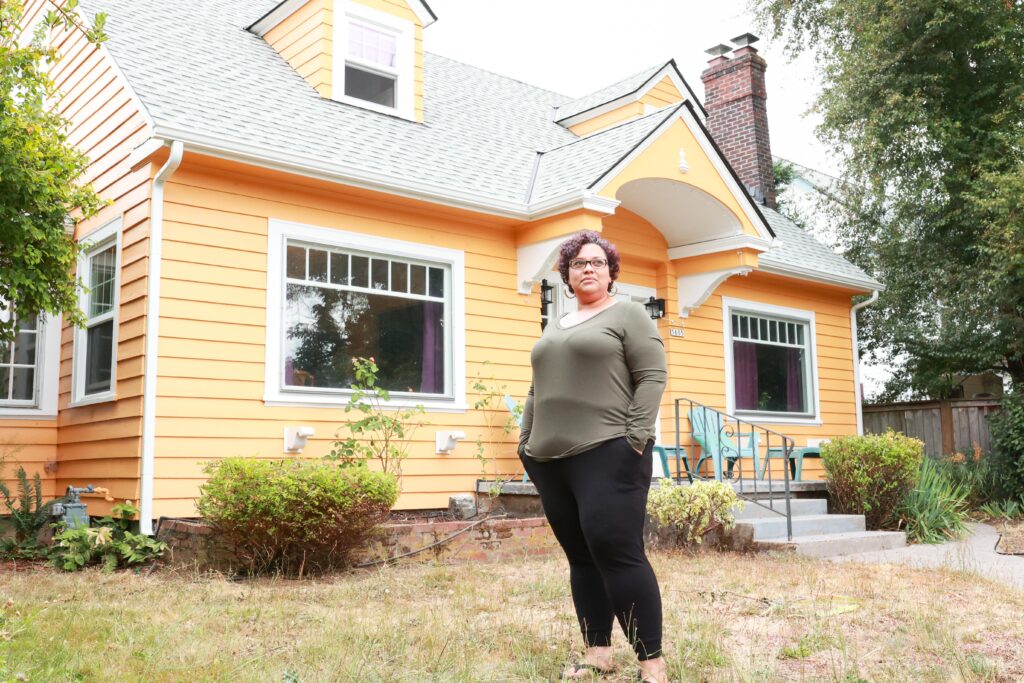 Michelle’s home is a healing place, that recently needed healing of its own.

Self-employed as a psychotherapist, Michelle uses her home in North Portland for client sessions, helping people do emotional work through difficult times. It is a stately house, nearly 100 years old, and it is steeped in family memories.

On the dining room wall is a large photo of her grandmother, standing in front of a motorcycle, taken not far from Michelle’s home, in what was the former city of Vanport. Her grandfather worked in the shipyards there before they moved to Portland. Her grandparents later divorced, and in the late 60s, Michelle’s grandmother purchased the house Michelle lives in today. The house was passed on to Michelle’s uncle, and then bequeathed to Michelle when her uncle died a few years ago. Michelle and her parents had lived in the house prior to her uncle’s passing, and she knew she was going to inherit it since she was a young girl.

By the time she did, however, the house was in serious decline. Built in 1924, the home’s roof and gutters were failing and damaging the structure, necessitating extensive interior and exterior repairs. The piecemeal work Michelle’s dad was able to do stopped when he passed away in 2011. Her mother died in 2015. It was now just her, an aging house, and repairs that far exceeded her resources. DIY Youtube videos could only take her so far, she joked.

“I knew I was going to get this house when my uncle passed, and I very much wanted this house, but it felt very heavy the knowledge of inheriting a house that was falling apart,” Michelle said.

Even after two previous generations living in the home, Michelle was still making payments on her uncle’s second mortgage. She also had considerable debt on loans for her education, while her income, she said, was minimal.

Through a colleague, she heard about Habitat for Humanity’s Home Repair program, and she knew she had to try something or face losing the home to disrepair.

Habitat’s Home Repair Program partners with qualifying homeowners to alleviate health and safety issues and complete needed home repair projects. Getting approved, as she described it, gave her a green light that saving the house was possible.

Habitat replaced her roof, gutters, and rotted deck material. Since her home was built before 1978, Habitat referred her to the Portland Housing Bureau’s Lead Hazard Control Grant Program. That program was able to help her with lead remediation, including the treatment and painting of kitchen cabinets, window replacements and exterior painting. Lead paint poses serious health consequences for children and adults, and lead dust disturbed during renovation work is particularly hazardous.

She also qualified for a Healthy Homes grant through the city’s housing bureau and was able to get help with siding and fascia repairs, and the installation of a bath fan — critical for removing damaging moisture from the home.

With the repairs complete, Michelle now sees an extended future for her home. In a once predominately Black neighborhood where so many of its residents were pushed out by economic displacement, she values the importance of preserving the home’s Black ancestral ownership. She said she even envisions someday turning the house into a therapy center for BIPOC folks. The home is now a safe and healthy place for herself and her clients.

“It’s a house that I really love. And it was very much the intention of two generations that this became mine,” Michelle said. “There was not a whole lot that my family was able to pass down to me. So, I really wanted to honor something that precious.”

“If I can — my fingers are crossed — I’m hoping to pay the house off a year early. So that on the house’s 100th birthday, it will be paid off and I can have a huge party.”