Skip to content
Home » Blog » She dreamed it, then built it with Habitat | Teberih’s Story 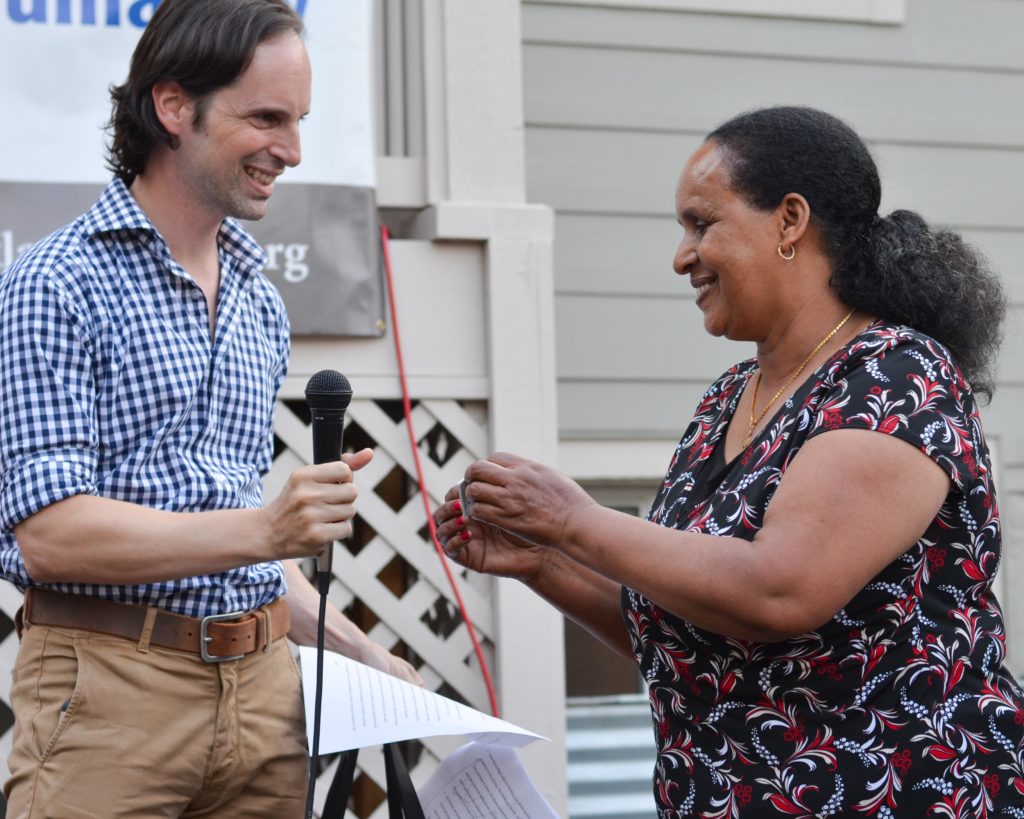 While Teberih commuted to her job at the Oregon Health & Science University where she worked as a housekeeper, she passed by the Habitat office on Killingsworth Street. The logo design of three stick figures celebrating the roof over their heads and the words ‘Habitat for Humanity’ piqued her attention. Her dream for the longest time was to buy her own house so that her children could have a place to come back to once they were older. One day, she called the phone number listed on the Habitat website, which led her to qualify and apply for the homeownership program. In 2015, she partnered with Habitat and built her own house from the ground up in the cultural hub of Southwest Portland.

Teberihs homeownership journey was not an overnight success, but it took patience, courage, and hard work over many years to build an affordable home to call her own. Today, she has put three children through school — two of whom earned honors and full-ride scholarships to universities — and she was elected by her neighbors as the community president. In this role, she creates bonds within the community and resolves issues that arise between neighbors.

Teberih’s journey to homeownership first began in East Africa where she was born and had a family of her own. She fell in love with and married her husband, a technician by profession, and bought a four-bedroom house for her children.

“In my country, I had a four-bedroom house. I was home before I came (to America). I know home, how it’s important for people. You can feel free, you can do anything,” she says.

Life took a sudden turn, and Teberih’s husband passed away, leaving her and three children on their own. Teberih decided she would do whatever it took to give her children a chance at improving their education. In 1999, she moved to Lincoln, Nebraska, where she lived for six years. She did not feel at home in the cold weather, so in 2005 when her cousin in Oregon offered a place with warmer weather, she moved.

For the next 10 years, Teberih and her family lived in a tight two-bedroom apartment, all while she kept dreaming of owning a home so that her children could have space to study in. These were difficult times for Teberih. She would work all day while her mother helped with watching over her children. Although busy working eight hours a day, she never missed taking her children to soccer practice, school conferences, and all the other activities they were involved in.

With her children growing up fast, the family outgrew their space, so Teberih applied for affordable homeownership through Habitat and soon received the message that she had been accepted. After dreaming of owning her own house for over a decade, she got to hammer in the nails into the frames which now hold up her home.

“I was struggling but life is good for me now,” she says. My children got a degree, scholarship of 4.0 GPA. So, happy life!”

Ever since selecting and purchasing her home in 2015, life became full of possibilities for Teberih and her family. Her children have their own rooms to study in, and Teberih has a place she can pass on to her children. Today, she has blossomed and built long-lasting relationships with her neighbors, as well as with members of her church. Since purchasing the home, two out of three children have outgrown the nest and moved out to their own apartments. Although they have moved out, her children have peace of mind knowing that there is a stable home they can come back to for family reunions.

Terberih will retire in three years and looks forward to the day she becomes a grandmother and can offer her grandchildren a place filled with love and warmth, just as her mother did with her.