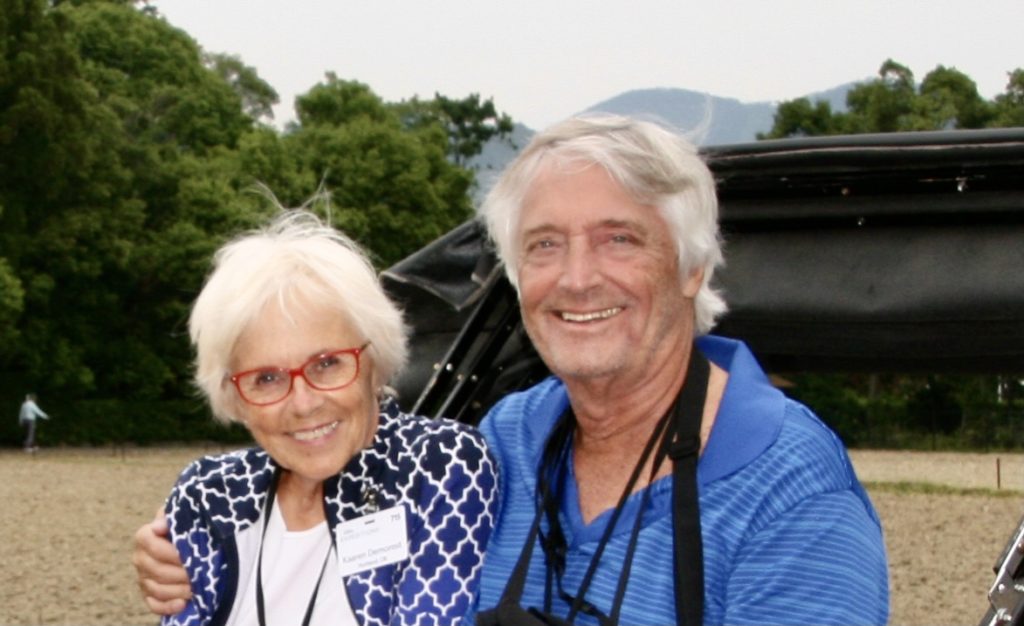 If you’ve ever explored a submarine moored in the Willamette River, found yourself conducting mini physics or chemistry experiments in one of the OMSI labs, or marveled at the cosmos displayed above you in the Kendall planetarium, you have more than the scientists and curators at the OMSI to thank — you have Harry and Kaaren Demorest to thank, as well.

This is because Harry was the volunteer chair of the committee behind the massive fundraising campaign which brought OMSI to life in the beautiful buildings we now enjoy. “Thirty-five million dollars in the mid-1990’s was the level that a university campaign would be. I remember how doubtful we all were that we could pull it off. Then, the floods of 1996 put the long-term viability of that site in question, and it didn’t look good for a while. I’m really proud that we all prevailed to make it happen. It took a lot of donors and public will, but we did it.”

Today, they are helping Habitat for Humanity Portland Region in its biggest-ever capital campaign with a generous philanthropic investment. Why? Because for our region to work well, housing matters.

In 1980, as a young accountant who would in the years to come chair the Oregon Investment Council, Harry hadn’t yet dipped his toes into this kind of civic action. He was first invited to help fundraise to save the struggling Portland Symphony. Harry stepped up because he knew that a first-class city benefited deeply from a vibrant arts scene. The Symphony meant more than a collection of talented musicians playing, it was the locus of successful tourism, local arts education, and culture.  He had to help tell that story to people who could make a difference with their funding and the people Harry called helped save a regional treasure.

By the early 1990’s during the OMSI campaign, Harry didn’t think twice about picking up the phone and calling people to ask for their money. Again, it was his civic duty.

Kaaren, on the other hand, was not the phone-calling type, though she ruefully appreciated Harry’s drive to bring others into an effort. Kaaren’s sharp eyes on the organizational strength of the causes they now generously support is evident. “Who are they serving? What is a person’s experience who goes through the Habitat homeownership application process? What homeownership education skills is Habitat equipping them with?”

Kaaren and Harry appreciate how Habitat families are truly partners in their home investment. They are inspired by a family’s willingness to choose to buy a Habitat home, to help build it alongside their future neighbors, and to commit to all of the responsibilities of homeownership.

While Harry was the chair of the Portland Development Commission (now Prosper Portland), Harry and Kaaren had an opportunity to participate in their first Habitat for Humanity open house celebration in North Portland. It was a moving experience for a few reasons. Harry and Kaaren grew up and attended schools very close by. They both graduated from Ockley Green Middle School and Jefferson High, before they continued on to Oregon State University. At OSU, Kaaren was involved with a career development program connecting widowed and divorced women back to work or volunteer engagement in the community. In addition, she worked with OSU extension to help pregnant teens, formerly incarcerated people, and others  access nutrition services.

Both Harry and Kaaren share a deep appreciation of the education and opportunities they received  and agree that their teachers and OSU professors are their biggest heroes. Harry and Kaaren continue to support young people in their childhood neighborhood through mentoring and education programs.

But, something about that Habitat home celebration he attended created an “aha” moment for Harry about what could be possible. He thought, “This is how it should be done.” He and Kaaren saw people from all walks of life coming together to help. Seed money from the City or the government can help, but the key is the private sector pitching in, along with the homebuyers and volunteers swinging hammers side-by-side.

It would be a few years more before the Demorests would become philanthropic leaders with Habitat. They were inspired again by another Habitat open house celebration in Northeast Portland’s Cully neighborhood in 2016. Harry’s former colleague during his heyday of city leadership, the late Nick Fish, spoke at the event, and they spent time catching up, rekindling their shared appreciation for civic activities that truly bring people together and have lasting, transformative results.

Now, Kaaren and Harry are proud to be leaders in Habitat for Humanity’s Triple Your Impact campaign. Their generous leadership pledge made in 2019 is fueling homebuilding and igniting critical momentum for Habitat to dramatically increase its scale across the Portland region.

The Demorests know that a city that works must work for everyone. Home is the basis of stability for every family and every child. With an affordable, decent home, children will do better in school; their parents take pride in providing for their family now and into the future. Harry and Kaaren know that a great city includes vibrant arts, safe playgrounds, high quality public education, and a place where everyone has a decent place to call home. We are honored to partner with them as we bring this vision into reality. We invite you to join them by making a gift today to the Triple Your Impact campaign.